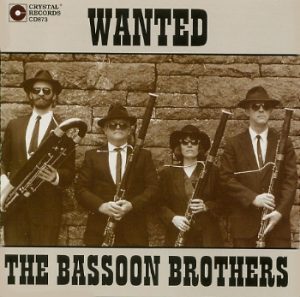 Wanted:  The Bassoon Brothers (Crystal Records CD873):  “Wanted for low-down playing and bass behavior.”  Contains Peter Schickele’s Blue Set No. 2 for Four Bassoons, as well as his Last Tango in Bayreuth in a new arrangement by one of The Brothers.  The Bassoon Brothers also show that the P.D.Q. Bach instrument the windbreaker can be used in jazz pieces as well, and include more bassoon quartet pieces than you can shake a bundle of sticks at.

Cover image, audio clips and track listings are copyright © 1998 Crystal Records and are used with the permission of Crystal Records.  Any other copying by other parties for other uses is not authorized.