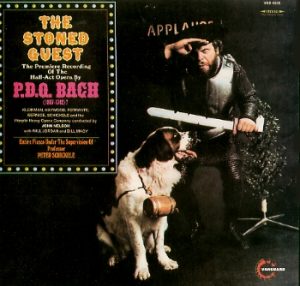 [6]  Two Madrigals from The Triumphs of Thusnelda  (P.D.Q. Bach)
“The Queen to me a royal pain doth give”
“My bonnie lass she smelleth”

The lyrics for not one, but both of the madrigals from The Triumphs of Thusnelda featured on this album, are printed in their entirety on a separate lyrics page.

Cover image, audio clips and track listings are copyright © 1970 Vanguard Records and are used with the permission of Vanguard Records.  Any other copying by other parties for other uses is not authorized.