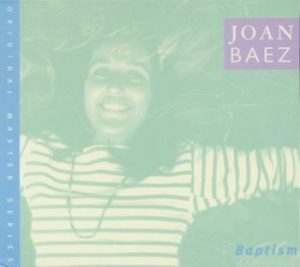 Joan Baez:  Baptism, A Journey Through Our Time—Original Master Series (CD-79240):  A selection of poetry sung and spoken by Joan Baez to original music by Peter Schickele.   Digitally re-mastered with three additional tracks from the original recording sessions.  (The original 1968 version of Baptism is also available, but only on LP.)

[3]  Minister of War (translated from the Chinese by Arthur Waley)

[4]  Song In The Blood (Jacques Prévert)

[9]  Who Murdered The Minutes (Henry Treece)

[16]  Poems From The Japanese (Translated by Kenneth Rexroth)

Cover image, audio clips and track listings are copyright © 2003 Vanguard Records and are used with the permission of Vanguard Records.  Any other copying by other parties for other uses is not authorized.