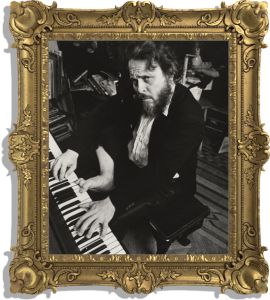 In 1954, a young scholar named Professor Peter Schickele, rummaging around a Bavarian castle in search of rare musical gems, happened instead upon a piece of manuscript being employed as a strainer in the caretaker’s percolator. This turned out to be the Sanka Cantata by a then-unknown composer named P.D.Q. Bach.  A cursory examination of the music immediately revealed the reason for the atrocious taste of the coffee. When the work was finally performed, the Professor realized too late that he had released a monster on the musical world. 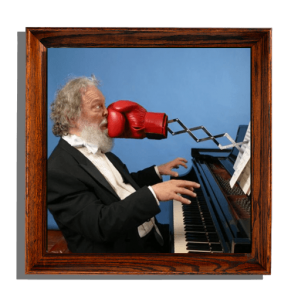 Professor Schickele pursued his research into the life and work of P.D.Q. Bach from his academic base, the Department of Musical Pathology at the University of Southern North Dakota at Hoople. With the misguided support of the U. of S.N.D. at H. and otherwise reputable recording and publishing companies, Professor Schickele went on to discover many more P.D.Q. Bach scores, each one more insidious than the last. For more than fifty years, Professor Schickele proved indefatigable in presenting concerts of P.D.Q Bach’s music, appearing with countless orchestras, including the New York Philharmonic, the Cleveland Orchestra, the London Symphony Orchestra, and the Los Angeles Philharmonic, playing in cities and on campuses from Maine to California and back again and all the way to Australia. Professor Schickele has been noted for his tendency to arrive late to concerts, sometimes swinging to the stage by a rope from the balcony or riding a motorcycle down the center aisle. His on-stage spoken introductions, riddled with spurious claims, sketchy observations, and uncheckable facts, have done little to enhance or uplift P.D.Q.’s standing in the music world. Nonetheless, Professor Schickele persists, insisting that a reluctant public pay heed to the oeuvre of a composer once called “a one-man plague.” 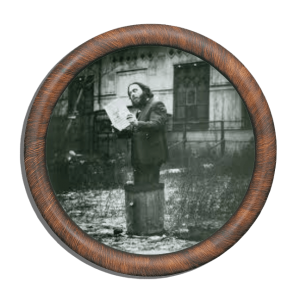 Through bribery and misunderstanding, Professor Schickele has managed to release 17 albums of recorded music by P.D.Q. Bach. Four of them, P.D.Q. Bach: 1712 Overture and Other Musical Assaults, Oedipus Tex and Other Choral Calamities, WTWP: Classical Talkity-Talk Radio, and Music for an Awful Lot of Winds and Percussion, won Grammy awards for Best Comedy Album.

Under duress, Random House has published eleven editions of his tome, The Definitive Biography of P.D.Q. Bach (which has been translated into German, and is also available in English as an audio book, read by Professor Schickele).

In a testament to the tenacity of poor taste, appreciation for P.D.Q. Bach has flourished in many places and periods of the modern era. In the 60’s, New York City audiences showed early signs of a particularly robust immunity to the music of P.D.Q. Bach; annual Christmastime concerts sold out Carnegie Hall and Lincoln Center, in a cultural tradition that endured for five decades. In the 70’s, college students discovered the potent combination of marijuana and P.D.Q. Bach records. Over the ensuing decades, P.D.Q. Bach concerts became a first-date favorite for certain segments of the population; the decline in the U.S. birth rate in the same period is considered to be a coincidence. In the families of P.D.Q. Bach fans who successfully produced offspring, P.D.Q. Bach records and related paraphernalia are now passed down from one generation to the next, cherished much like broken pocket watches and stained doilies, reminding us that fads may come and go, but some things you just don’t know what to do with. 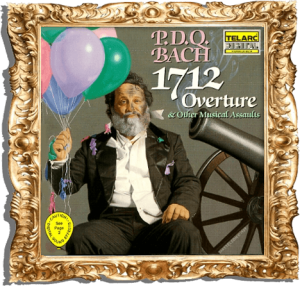 Today, Professor Schickele holds the position of Professor Demeritus, having successfully fought off an attempt by top brass at the University of Southern North Dakota at Hoople to strip of him of his tenure for reasons of “quality control.” Having stepped away, for legal reasons, from the experience of being heckled by audiences at P.D.Q. Bach concerts, he continues to publish sporadically, conducting his scholarly research in a corner stall—the only one with a window—in the campus barn housing the Department of Musical Pathology.