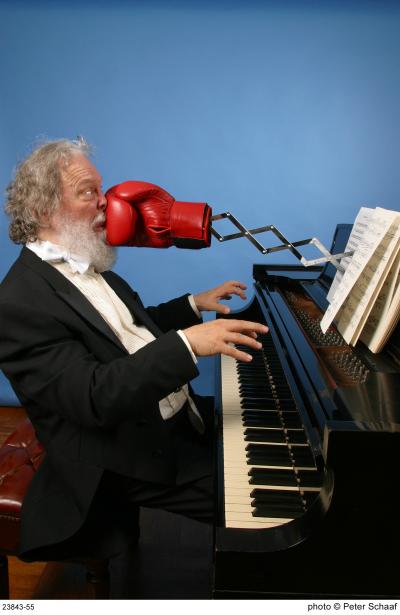 Every once in a while someone comes up with an idea that is so brilliant, so life-changing, that everybody wonders why no one thought of it before.  P.D.Q. Bach had such an idea when he decided to orchestrate his Twelve Quite Heavenly Songs, an ambitious cycle based on the signs of the zodiac.  Beethoven, in a letter to his publisher dated October 12, 1816, wrote, “Why didn’t I think of that?”  Since he had no idea that P.D.Q. had even written such a piece, however, and couldn’t have heard it even if he had, Ludwig decided to write a ninth symphony instead.

Now scored for off-coloratura soprano, tenor profundo, basso blotto and orchestra, the new version of this song cycle sounds much more orchestral than the original keyboard version. (But don’t worry:  the quality of the music has not changed a bit.)  Premiere performance.

You never know where a P.D.Q. Bach work is going to turn up—at least I never do—but even this inveterate musical explorer was surprised to find a manuscript locked up in a safe standing amid the rubble of a demolished building.  The “Safe” Sextet is written for the “forgotten” members of the orchestra:  piccolo, English horn, bass clarinet, contrabassoon, harp and celesta.  It’s a unique sound, I’ll say that for it.

Variations on an Unusually Simple-Minded Theme is a de facto piano concerto in the form of variations on a theme so simple-minded that only P.D.Q. Bach could have written it.  Ahead of his, as usual, time, the composer introduced choreographic movements for the musicians, the likes of which were not seen again until the heyday of the big bands in the 1930’s and 40’s.  The Professor himself will soloize.

The program is well-rounded off by a perennial favorite, the “Unbegun” Symphony, whose third and fourth movements were all that Prof. Schickele wrote.

Order your tickets today, before you have time to think better of it.